GMT vs. UTC. What’s the difference?

What is GMT time and UTC

With the globalisation and evolution of international relationships, the need for universal time identification has occurred. Especially, it was vital to have a standardised time zone for communication and military coordinations.

The implementation of Greenwich Mean Time (GMT) was the first step to determine the time zone of other countries in regard to GMT+0. Therefore, the difference in time for other countries is indicated either by adding or subtracting hours from GMT time. The primary difference remains to be the fact that GMT is the denomination of a timezone, while UTC is the title of the time standard.

Where the technologies get involved?

The advancement of telecommunication technologies influenced the creation of an even more precise system of time identification. In particular, the concept of Coordinated Universal Time (UTC) was designed to provide a more accurate timekeeping system. Although UTC and GMT indicate the same time, UTC is based on the more precise mechanism of time measurement. Nevertheless, both of these time standards are widely used in the world for a similar purpose of time coordination.

Definitions of GMT and UTC

The abbreviation of GMT stands for Greenwich Mean Time. The name derives from the place where the solar time was standardised for everyone: it was established at The Royal Observatory Greenwich.

The term “mean” indicates the average time the clocks need to pass through the solar day. Also, considering that each day requires the same interval, the pendulum clocks at the observatory was the perfect mechanism to standardise time for the universal coordination.

Although the abbreviation does not match the term, it was used as a compromise for the translation from European languages. UTC differs from GMT due to 24-hour system, which starts counting from midnight. To calculate the UTC time, the atomic clocks with frequency cycles are used to display the accurate measurements of time. Nevertheless, same as for GMT, the primary purpose of UTC is to denote the universal time zone in relation to others.

The history of GMT started with the decision of the International Meridian Conference in 1884 to establish the prime meridian which would denote the international standard of time. Considering that Great Britain was a developed marine nation, it used Greenwich Meridian to position own ships. Subsequently, Greenwich meridian was determined as zero degrees longitude, thus, the international standard time2. From that point, every nation used GMT to calculate the time in relation to this standard.

Eventually, GMT became the unified standard for the economic interactions between countries around the world. The advancement of the technologies of the wireless telegraph indicated that all countries require precise time standard. As a result, in 1911, the International Congress on Astronomical Ephemerides agreed to use GMT for the universal offset of the clocks for other nations.

Coordinated Universal Time was introduced as the more accurate replacement of GMT. In 1963, the concept of UTC was established as the primary international standard which would denote how other countries would regulate their time in relation to UTC3. The primary reason why UTC was considered to be a more accurate system was the fact that it used the rotation of Earth and atomic clocks for measurements. Moreover, to maintain the consistent time system, UTC does not observe Daylight Saving Time (unlike GMT). 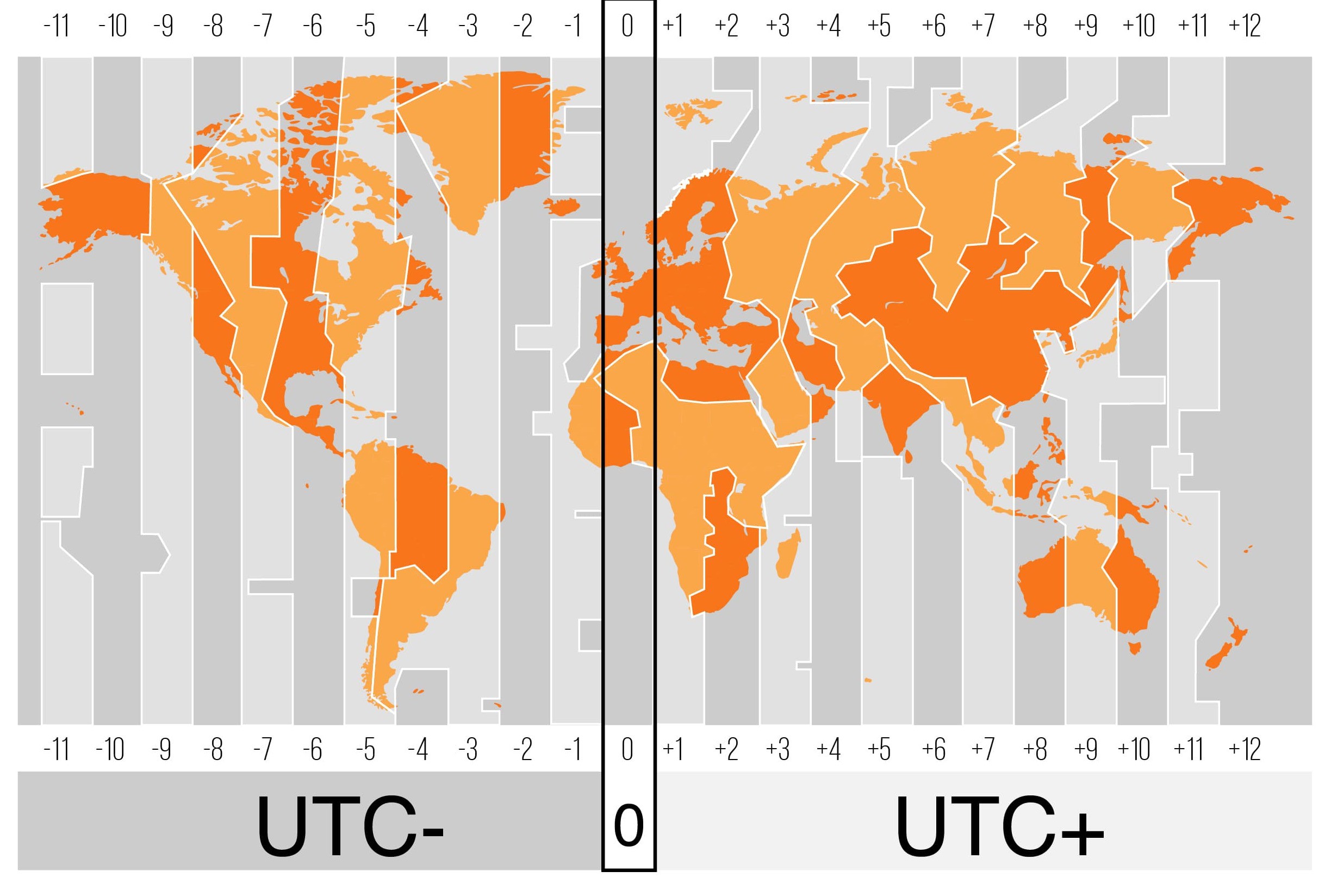 The UTC offset is the difference in hours and minutes from Coordinated Universal Time(UTC) for a particular place and date. It is generally shown in the format ±[hh]:[mm], ±[hh][mm], or ±[hh]. So if the time being described is one hour ahead of UTC (such as the time in Berlin during the winter), the UTC offset would be "+01:00", "+0100", or simply "+01". Source: Wikipedia

The system of UTC operates on the basis of International Atomic Time (TAI), which provides the high-precision data for the time standards. However, since 1972, TAI adds one leap second every 19 months. The positive tendency of the leap second in time reflects that the Earth slows down its rotation4. Nevertheless, due to the accuracy of UTC, it is widely used in the spheres which require high-precision coordinations.

Primary differences between GMT and UTC

Where it is used

Zulu time denotes the Coordinated Universal Time in the 24-hours standard which is used in the military forces and aviation in particular. Namely, Zulu signifies the universal time standard for the pilots who fly in different time zones7. However, the term Zulu is just the synonym for UTC. The name of the time zone derived from the transmission articulation of the letter Z (Zulu). Considering that Z signifies +0 offset from the prime meridian, it is was implemented for the military coordination in time.

Eventually, Zulu time replaced GMT with the more accurate timekeeping system of UTC8. This time standard is required for the naval, aviation, and other forms of military communication and coordination of actions in different time zones. There is also a specific rule on how to read and pronounce Zulu time. Namely, there is no colon between numbers and it identifies four digits in a row. For instance, 07:00 should be pronounced as “zero seven hundred” (0700).

Consequently, the differences in the terminology of GMT and UTC still create confusion in international cooperation. Even though UTC was introduced as a more accurate time standard, the occurrence of the leap seconds demonstrated that even this system has minor flaws for the universal time synchronisation. One of the most common proposition is to abandon leap seconds adjustments because it would go out sync with civil time very slowly 9.

Although abandoning the adjustments of civil time would make a difference only in the extremely long-term perspective, it is still significant for the software around the world, which was programmed with the consideration of UTC. Besides, considering the growing differences between time of day and clocks, the need for a new system of timekeeping will be needed in the future 10. Nevertheless, UTC still remains to be the most common universal standard of time for all countries.